BUT! I wanted to tell you that a new Introduction to Block Printing Workshop has been added to my calendar! Hooray! 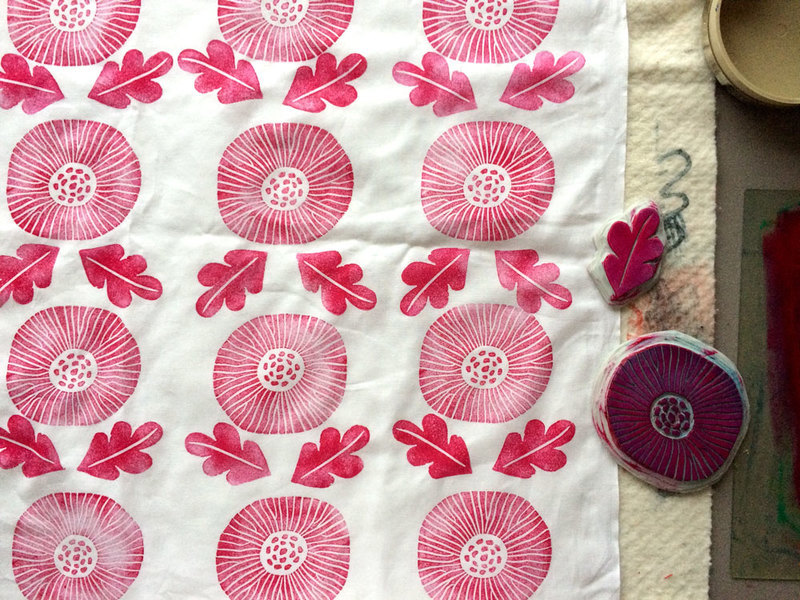 If you’ve been wanting to sign up for it, now is your chance. I have a limited seat available and I’m 99% sure this is the last one I’ll teach this year.

Hop on over to my enrollment page and claim your seat today.

Let me know if you have any questions 😊

Hope you’re having a fantastic day!

p.s. In case you skipped right to the bottom of the email, you can sign up for the workshop here.

Like many of you creative people, I love to learn. I love learning new skills and tools to create something new. Sometimes I set goals to learn specific skills (e.g. writing, learning a design software etc.) and tackle them businesslike, and others, like cooking and sewing, kind of happen organically.

Last October I posted a nature drawing tutorial on this blog and really enjoyed it. I’ve been meaning to do more tutorials and was hoping to venture into video making as well. And lo and behold, I was asked to be a guest teacher for the e-course The Journey Within: A Year of Handmade Art Journals hosted by Kiala Givehand in March!

I was honored to be asked, and it’s given me the push I needed to make my very first video tutorial!

I worked on it last week and learned a bunch in the process. I’m all about sharing tools and processes with you in case you find it helpful, too. For the most part, I didn’t use any fancy tools or tricks and hope it’ll make the process more accessible to you if you’re thinking about making a video yourself. This is my first time making a video, so if you’re more experienced, you probably won’t gain very much from it. But if you’ve never made one and are intimidated by it, this post is for you!

Enjoy the behind the scenes peek into my video production!

By nature I’m a planner. I like to gather as much information as possible before I get started on something new. I’ve been getting a little more relaxed about not having all the information before I start something lately, though. I know a lot of learning happens during the process of doing, and if you wait till the perfect moment, you may never start anything!

I don’t have unlimited financial resources, so I wanted to make this video without spending a ton of money and wanted to do this with things I already had without compromising the production quality too much.

I really didn’t know anything about creating a video, so I went searching for tutorials about filming and editing your own video on the internet.

Although this is not specifically about making a video tutorial, I found this Skillshare video, “DIY Filming: Creating Pro Video Using Tools You Already Own” by Mark Cersosimo super helpful! It was very easy to follow, and he has lots of practical tips you can use.

I also created an outline and scripts before I started filming so I have the clear vision of the flow and contents. I didn’t do the storyboarding, though, as I was pretty anxious to start filming. It would’ve made the whole process a little smoother if I had done it. 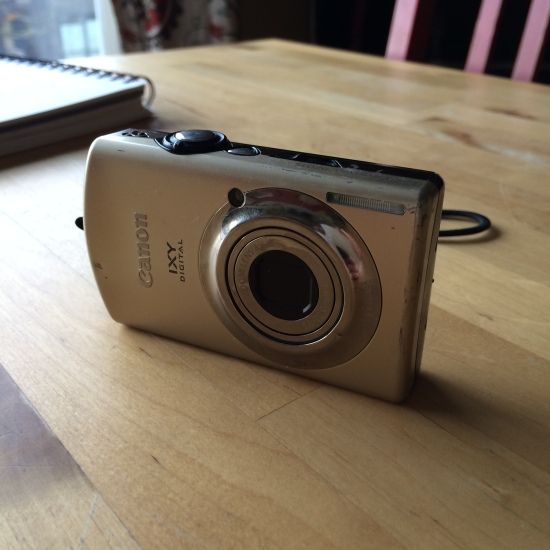 I decided to film with my old-school point and shoot camera. It’s Canon IXY Digital 920 IS, and I got it in 2008-ish? I enjoy photography and would love to upgrade to a DSLR camera some day, but this little camera has served me very well all these years and works just fine for now. 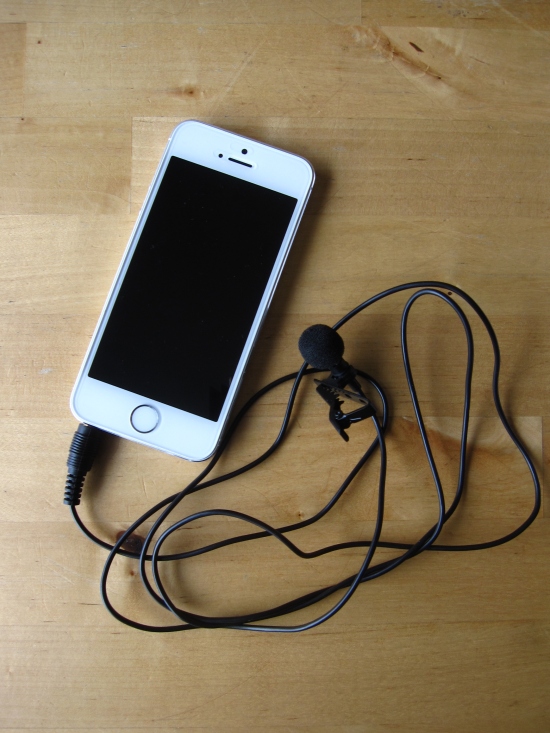 I recorded the audio on my iPhone 5 using the Voice Memos app (comes with your phone for free). I know the camera has a built-in microphone as well, but the quality is not very good. I’ve read that audio quality is more important to the audience than the video quality if you had to choose (here is a quick video to demonstrate the point), so I decided to record the audio separately using my phone.

I could’ve just put the phone in my breast pocket or something like that, but decided to get a clip-on microphone that plugs in to the phone to improve the audio quality just a tiny bit.

We have 2 parakeets in our tiny apartment, and they’re going to chirp no matter what, so I wanted to be extra diligent about getting a good enough quality of audio for this project. I got an inexpensive ($17) clip-on microphone above on Amazon, and it definitely made a difference on the audio quality! Well worth the investment. 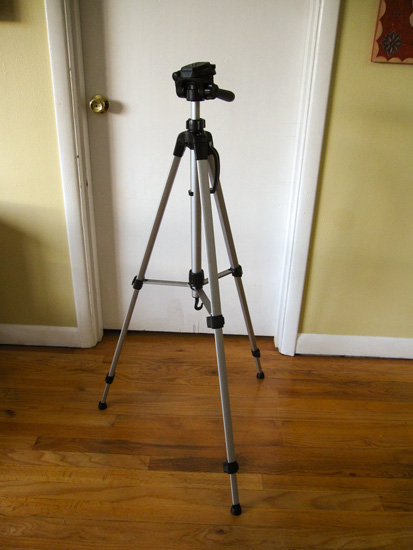 Because I was filming this video by myself, I decided to get a tripod. Got this basic tripod on Amazon for $23. It’s got good reviews and seemed fine as a starter tripod.

But when I was doing a trial set-up, I quickly realized my tripod was not quite adequate. It was fine for shooting uplight or angled, but I realized I needed to be able to also get some overhead shots for to show my drawing process more closely.

Dave and I did some creative problem-solving, and came up with this totally DYI set-up to achieve my creative vision 😀 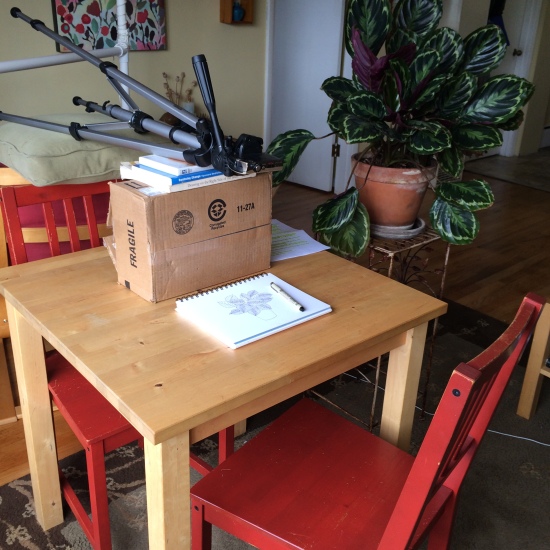 Ta da! OK, I’m a little embarrassed to show you this super DYI set-up, but it totally works! And I didn’t have to spend any more $…which is always a plus 🙂

Basically, the tripod is laying horizontally on a box and a few books I piled at the right hight, with the camera facing down, and I placed a couple of chairs back to back and put a pillow on top for the tripod legs to rest on. You just need to look in the view finder to adjust it to the right hight/angle etc. before shooting.

I set up by the big window in our living room area during the shoot. Since it’s winter in the Pacific Northwest, I got a pretty good overcast indirect sunlight during the day time, which was perfect for the shoot.

While filming different segments, I made sure it was recorded after each take. Sometimes I thought I hit the record button but it wasn’t on, or my video was recording but I forgot to turn on the microphone etc. My camera would also think the memory card was full when it was not (maybe the old age?) and suddenly stopped recording in the middle of the take a few times.

So I’d shoot a segment, stop, check to make sure it’s recorded, upload the good recordings onto my Dropbox, delete the footage from the memory card and reformat the memory card (for some reason, my camera thinks it’s still there even after deleting the footage if you don’t reformat…)  and continue shooting again. I did the same thing for my audio. Great thing about recording it on my iPhone app is I can then upload the recordings straight from the phone to Dropbox.

I’ve learned the hard way to label the video and audio files correctly so it’s easier to match them up later when you sync them. For example, I’d shot multiple takes of my introduction and labeled them Yuko’s Intro Take 2, 3, 4, 5 etc. to choose the best one later. But I only uploaded the voice recording that I liked the best and labeled it “Yuko’s Intro” without the corresponding number to match the video, so later when I was editing I had to spend extra time to figure out which footage the voice recording went with.

These are somewhat tedious steps but helped me save a ton of time and frustration when editing the project!

How can you tell a good story without music, right? Since I’m not a musician, I looked for some free/royalty-free background music resources online and found these sites helpful!

Incompetech – I found it helpful to start out with their collections rather than searching from a huge database. Their collections are grouped by the genres and feelings you’re looking for.

After I got the footage and audio uploaded in my Dropbox folder, I put together the video in iMovie app. It’s a free app that comes with your Apple computer and lets you produce a basic video pretty easily.

Again, I looked for some tutorials on how to edit your video in iMovie and found these pretty helpful!

1. Syncing Sound in iMovie Tutorial by Matthew Pearce is a short and sweet tutorial about how to sync your audio and video in iMovie. I love his “3 claps before talking” trick! So helpful.

2. iMovie 101 by Simply Mac is a quick introduction to the basic functions of iMovie. Good introduction but it’s for an old version of iMovie, so I got a little confused.

3. iMovie Tutorial for Beginners 2016 by Eric Timmer gave an overview of the basic video editing functions for newer iMovie app. It was a little long form (43 minutes) but gave me pretty much everything I needed to know to put my video together in the newer version of iMovie.

OK, that’s it! I had a lot of fun making this video and hope it was helpful for you!

My Nature Line Drawing tutorial will be available for students in the e-course next month. It’s not too late to join the class for this quarter only or for the whole year (definitely more value for the investment!) to get access to my tutorial and tutorials from 18 other teaching artists. 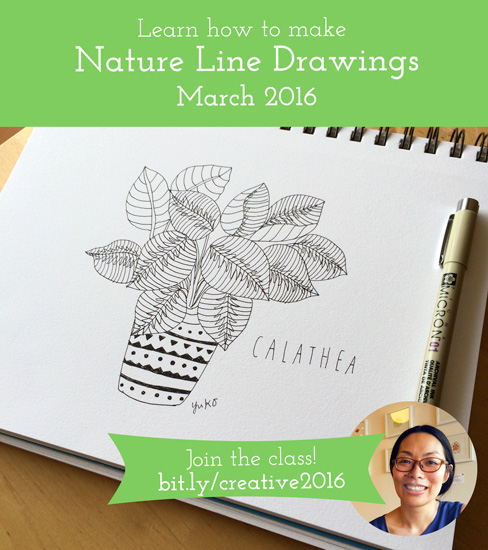 Learn how to make nature line drawings with me this spring! In case you missed the link, you can learn more and join the class here.

Have a wonderful day guys! 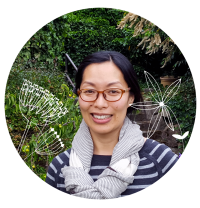 I’m very excited to let you know that the registration for my (very first!) Introduction to Block Printing on Fabric class is OPEN! You can go to this link to sign up! 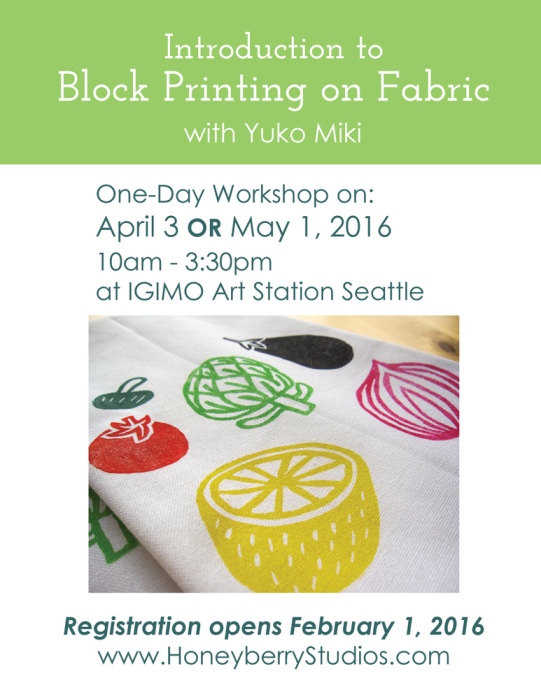 In this hands-on one-day workshop, you’ll learn the basics of making your own design, carving your block, and printing them on a fabric.

Early bird rate ($105) is available until February 15, and then it’s going to be $125. Materials and tools will be provided. I’m keeping the class size small, so sign up early! No drawing or printing experience necessary 🙂 It’s gonna be a blast, guys!!! 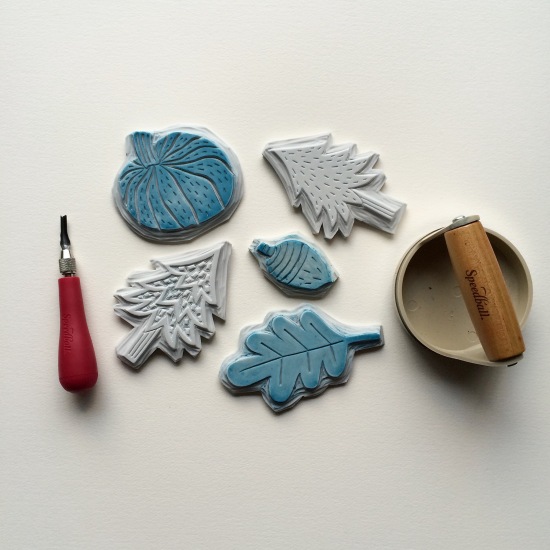 If you’re in the Seattle area and want to find a new creative activity to get into (and just a warning, block printing is highly addictive!),  join me on April 3 or May 1 at IGIMO Art Station (4739 Rainier Ave S, Seattle, WA 98118)!

Can’t wait to have you 🙂